The competitions aimed to encourage innovations in the city’s major crafts and folk art sector, and inspire a new generation of craftsmen & women and folk artists in the following categories:

Prizes were as follows:

All interested participants must audition to enter the competition by:
The primary considerations in choosing the finalists were as follows:

The secretariat received the following number of proposals of each of the categories:

A total of eight (8) finalists per category were to be chosen. The following were the competitions finalists:


BACK-STRAP WEAVING
Tapestry with dimensions of at least 14” in width and 3 yds. in length. Introducing other materials to enhance the entries is allowed as enhancements, but the weave shall remain the dominant component of the tapestry.
BASKETRY

A bag or storage basket inspired by any of the traditional Cordilleran designs such as the pasiking, sangi, inabnutan, kayabang, etc. with dimensions of at least 12” (w) x 12” in (h) x 12” in thickness, or for circular designs, a diameter of at least 12” x 6” in height. Introducing other materials is allowed, but the main raw material for this category, bamboo, must be the dominant raw material of the finished product.

WOODCARVING
A decorative piece that must be at least 24” in height. Introducing other materials is allowed, but the main raw material, bamboo, must remain the dominant material.


*For the Woodcarving category, while there were exactly eight (8) submissions, only seven (7) made it as finalists because one of the entries primarily involved etching and therefore did not qualify as a woodcarving piece.


METALCRAFT
Entries must be a set consisting of any three (3) of the following pieces: Neckwear (necklace), Wrist-wear (bracelet), Ring, Headwear (tiara, etc.), Earrings, Nose Ring. Introducing other materials is allowed such as precious stones, gems, and the like but metal should be the most dominant material.

The finalists were to be awarded a grant of P5,000.00 each as honorarium and provided raw materials to create their entry. But due to the unique circumstances of each of the categories, in a meeting with the finalists, the secretariat proposed the following which the participants approved of:

BACK-STRAP WEAVING - Finalists to receive P5,000.00 as honoraria and provided with a back-strap loom and frame plus assorted threads courtesy of HABI – The Philippine Textile Council which was the primary sponsor of the category.

BASKETRY - Finalists to receive P5,000.00 as honoraria and provided with at least eight (8) pieces of anes, a type of bamboo plus an additional P2,500 for their tools.

Anes, the type of bamboo preferred by the finalists, were sourced by Ms. Pelin Contales and Ms. Minda Ciano from Atok, Benguet. The secretariat ordered a total of 250 pieces of this bamboo measuring at least 6 feet each.

WOODCARVING - Finalists to receive P5,000.00 as honoraria and provided with giant bamboos plus an additional P2,500 for their tools.

METALCRAFT - Finalists to receive P5,000.00 as honoraria and an additional P2,500 for their materials and tools.

Participants were given a total of seven (7) days with eight hours per day from November 11 to 17, 2019 to complete their entries, on-site and under supervision of the secretariat-designated supervisor.


THE EXHIBITION, THE JUDGING and THE WINNERS

The exhibition of the competition finalists’ entries opened to the public on Monday, November 18, 2019 and immediately became one of the most viewed exhibits during the festival.

The secretariat then finalized the composition of the panel of judges, as follows:


After a total of eight days, the finalists’ entries were completed and exhibited and judged wherein a simple ranking system was used: each of the judges ranked their preference from one to eight, with one being their choice for the winning entry. After the scores were tallied, the entries were ranked with the entry with the lowest number as the winner, the second lowest winning 2nd prize and the third lowest winning 3rd prize.

The judges were accompanied by members of the festival staff during the judging to ensure that they are informed about the mechanics for each of the categories. Minor violations/deviations from the competition mechanics were pointed out such as some entries’ dimensions not meeting the minimum requirements, etc., and although these entries were not disqualified, the festival secretariat gave the judges the prerogative to determine such violations’/deviations’ effect on their ranking. The festival staff also answered their inquiries on the production process undertaken for each of the entries.

Below are the final entries and their ranking after the individual judges’ ranking sheets were tallied, a task undertaken by Ms. Dana Cosio-Mercado together with members of the festival secretariat: 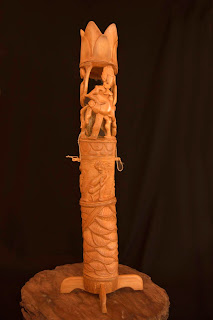 The competition proper started on schedule on November 11, 2019. The excitement was palpable among the competitors. And while it was a competition, the sense of community and camaraderie among the participants was evident. The following are observations and footnotes submitted by the stage manager in charge of the activity, Mr. Joselito Baleta: