Originally, the plan was to provide a stage and sound equipment for musicians who wish busk during the festival. But while several musicians were willing to simply perform and busk, the project management team decided to adjust the festival budget to be able to accommodate professional fees for the featured performers. The budget wasn’t much, but the team was at least able to provide honoraria that are a bit above the prevailing local standard gig rates – and to add to their honoraria, the performers were still allowed to busk during their respective scheduled performances.

The Kafagway Garden, which was the main courtyard, was the original venue for the series of live performances. With a fountain at its center, lush towering trees illuminated by strings of light bulbs, a corner stage that was constructed particularly for this purpose, improvised benches set-up using the wooden posts intended for the ongoing structural reinforcement of the old Diplomat Hotel, it was a perfect venue for intimate outdoor concerts. 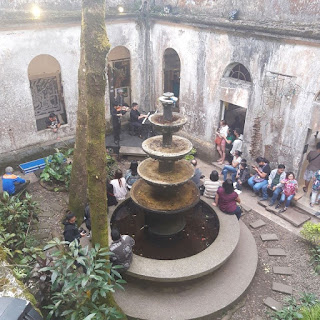 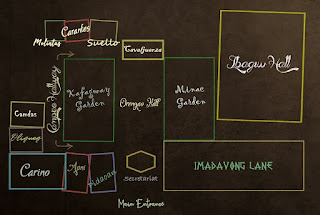 But while the first few performances were staged there, due to the rains brought in by Typhoon Ramon, the rest of the scheduled performances had to be moved indoors at the Orengao Hall.

Other than visual arts, the local music scene is one of the biggest sectors in Baguio’s creative community. There was no actual audition process, aside from certain performances that were commissioned by the festival, the secretariat made an open call instead to musicians who wish to perform during the festival sometime in mid-October through the festival’s website and social media sites. Numerous bands and solo performers sent in their portfolios via e-mail or visited the Ibagiw secretariat at the OTOP office. There were enough slots in the schedule to accommodate performances, and all that was essentially needed was for an artist or a group to signify their intention to perform, present a demo reel or a video of past performances, commit to a schedule and a slot would be reserved for them.

All in all, there were 18 acts with nearly 60 performers who performed in this event entitled “Sunsets at the Courtyard” which ran from November 17 to 23, 2019. All performances were free and open to the public. 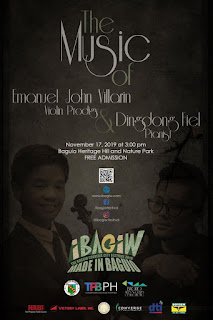 EJ VIllarin, violinist and Dingdong Fiel, pianist - the two renowned classical instrumentalists opened the series of performances with a repertoire of classical pieces from around the world followed by a performance by Ivee Bongosia, folk musician and FiendFyre, flow arts expert.

Acoustic music by Jonathan ‘JJ’ Ramos and the duo, July and Jojo (July Parrocha on vocals and percussions and Jojo de Leon on guitars).

Flights of Fancy led by Reuel Owat Carantes started the afternoon with familiar 80s and 90s hits followed by blues act Caesar Salcedo (vocals, guitar) and his band (Nelson on lead guitar, Marlon on bass, Wally on trumpet and Toper on drums). 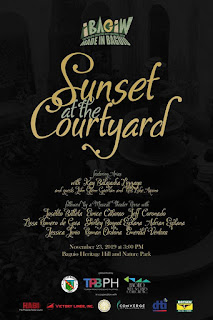 * With annotations by Eunice Caburao,
stage manager in-charge of activity